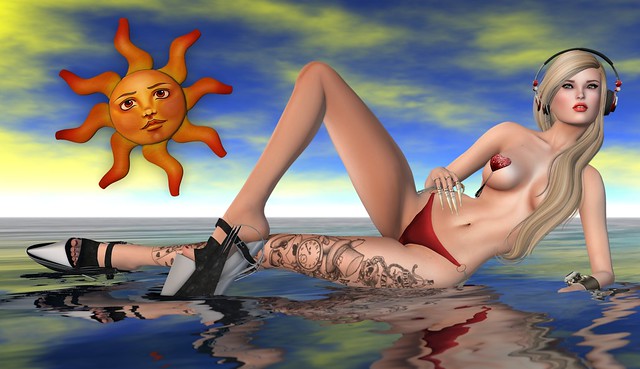 It’s nice to know that even if it is a tad chilly in my Real Life that I can always imagine it being warm and pleasant in my virtual life!! 😀

There are many events running in Second Life now as it is the beginning of the Northern summer. And Alles has leapt into the pool, so to speak, and decked herself out with stuffs that are new and sexy.

So, what is Alles wearing:

E-Clipse I’m Late! HeadPhones Red … made by Thetra Blackheart. Purchased at the Alice in SexyLand event, which is open from June 12th through to June 26th. NEW.
Alice in SexyLand

[Entwined] Olivia hair … made by VivienMarli Resident. I am wearing this gorgeous hair in one of the tones from the Naturals pack. Purchased at the current round of Shiny Shabby, which began on June 20th and finishes on July 15th. NEW.
Shiny Shabby

[Since 1975]-RedHeart Nipple Band (Right) … made by ocean Craft. Purchased as a gacha item at the Alice in SexyLand event, which is open from June 12th through to June 26th. NEW.
Alice in SexyLand

Zaara : Morjim bikini bottom (maitreya) … made by Zaara Kohime.
This was gifted to me by a dear friend who was lucky enough to win two copies on the Zaara gacha machine at the current round of The Arcade Gacha. NEW.

AZOURY – Alma Wedge Sandals – Dark (Maitreya) … made by Aniki Seetan. Available now at the current round of Shiny Shabby, which began on June 20th and finishes on July 15th. NEW.
Shiny Shabby

The pose that I used is CORPUS – Lounge Series 006 … made by Diconay Boa. This was purchased as part of the Lounge Series set at the May 2015 round of Event @ 1st. This pose was slightly modified by me by use of my Animare HUD. NEW.

3 thoughts on “At One With The Sun”