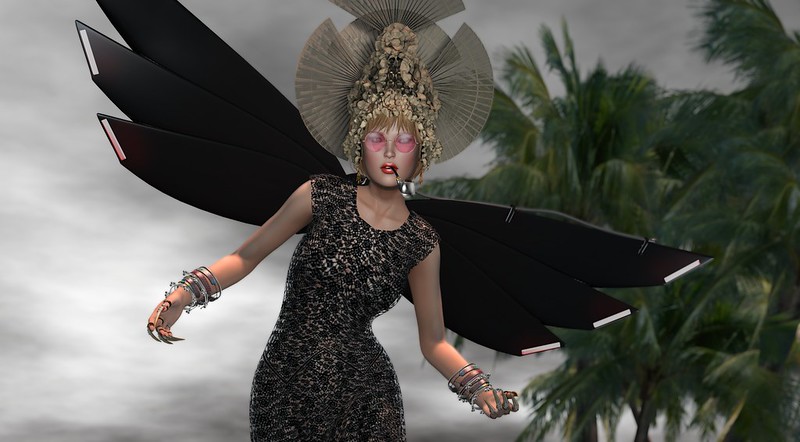 But not quite the creature from the dreaded Black Lagoon, one would hope!! 😀

AZOURY – Harmonie Headwear (Cream) … made by Aniki Seetan. This unrigged mesh headgear will be available at the next round of the On9 event, which is open from June 9th through until June 28th. NEW.

[monso] My Hair – Choa /Regular Pack 1 … made by Morphine Janick. Purchased at the current round of FaMESHed, which began June 1st and ends on June 27th. NEW.

Zaara [Goa party] : Retro sunglasses *rosegold-pink* … made by Zaara Kohime. A gacha item from the current round of The Arcade Gacha, I purchased it at The Pea’s Arcade Yardsale. NEW.

AITUI – Mechanical Wings – Butterfly Effect, Black … made by Jesseaitui Petion. A gacha item from the current round of The Arcade Gacha, I purchased it at The Pea's Arcade Yardsale. NEW.

Barbara Dress laceCoverUp XS and Barbara Dress laceCoverUp XXS … made by Wade Washborne.
And why am I wearing two layers of the laceCoverUp, you may ask? Mainly cos having chosen not to wear the dress itself, a single layer of the CoverUp was just a bit too revealing in terms of nipples and other bits. The Barbara dress is available now at Event @ 1st, which is open from June 1st until June 25th. NEW.

The sole prop that I have used is:

And lastly, the pose that I have used is oOo super_one … made by Olaenka Chesnokov. Purchased in April 2015 as part of a seven-piece Super pose set, which was a Fifty Linden Friday item.