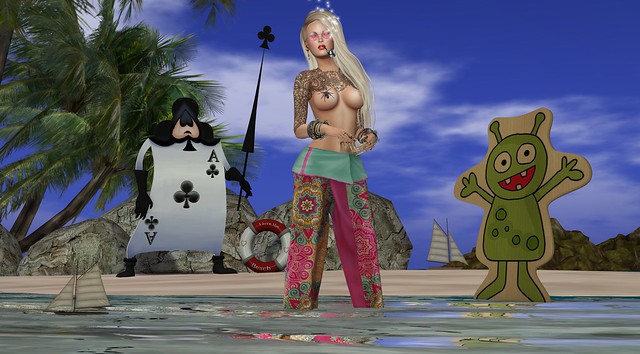 I took this picture at home, so I set up bits and pieces like the palm trees and the sand to try to give my image a bit of a Goan feel, so to speak!! 😀

~Tableau Vivant~ Rileigh hair [faux dreads] (F) … made by M4ri1yn Magic. I’m wearing this in a tone from the Frizzy Chic HUD – Naturals I pack. Available very soon at the June 2015 round of We Love Role-Play. NEW.

Letis Tattoo : Inermis PACK : Maitreya HUD : PACK15001 … made by Leti Hax. I am wearing the Inermis Little version of this tattoo. Purchased at the current round of Suicide DollZ, which finishes on June 5th. NEW.

Zaara : Arpora Fisherman's Pants (fitted mesh) *acid trip* … made by Zaara Kohime. A gacha item from the current round of The Arcade Gacha, I purchased it at The Pea's Arcade Yardsale. NEW.

And for those who want to save money on the June 2015 round of The Arcade Gacha, the Seraphim blog gives a full list of all the yardsales that are currently in operation.
http://seraphimsl.com/2015/05/31/the-yardsale-list-jun-aug-2015/

Card Soldier-Club … made by Precious Restless. This is part of a Wonderland set that was released by Boudoir in 2014.

Sway’s [Nautical] decoration . life belt beach … made by Sway Dench. A gacha item from the current round of The Arcade Gacha, I purchased it at The Pea’s Arcade Yardsale. NEW.

Alouette – Green Alien Cutout … made by the late Scarlet Chandrayaan.

The pose that I have used is KaTink – Ruby 7 … made by AnneMarit Jarvinen.