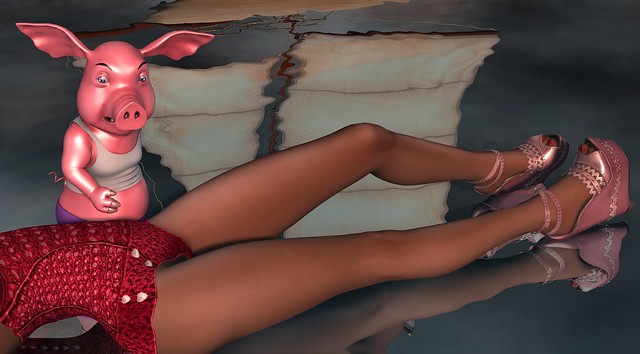 I just can’t be left alone in Second Life – can I?

Miamai_Arica Red_Maitreya Mesh Body Applier bodysuit … made by monica Outlander. Purchased at
the latest round of the Shiny Shabby event, which began on May 20th and finishes on June 15th. NEW.

Pure Poison – Sandra Sandals – Maitreya … made by Shaleene Kenin. Worn in pink. Available now at the latest round of the Shiny Shabby event, which began on May 20th and finishes on June 15th. NEW.

Mutresse – Guilty Pig … made by Eeky Cioc. Purchased at the March 2015 round of The Arcade Gacha.

The pose that I have used is KaTink – Alexxa 7 … made by Maliah Naidoo. However this pose has been put into a pose stand which I then tilted at 90 degrees and focussed in on my legs.