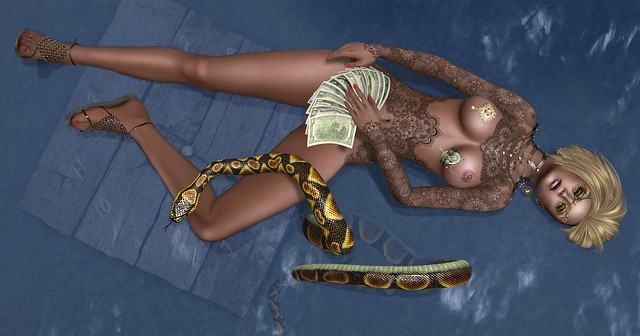 Well, of course it does – and especially if that money is er, strategically placed!! 😀

I took this picture at home (Lotus Flower) and Alles is wearing the following:

adoness : ragnarok : ash hair … made by Cruella Pennell. Purchased at The Dark Style Fair 2 which began on May 1st and finishes on May 31st. NEW.

AZOURY – OMEGA (Gold/ Rusty) … made by Aniki Seetan. They are the cute “eye coverings” that I am wearing. Available now at the Totally Top Shelf even which finishes on May 22nd. NEW.

Pure Poison – Akira Leather Collar – Brown & Gold … made by Shaleene Kenin. Available now at the current round of The Secret Affair which began on May 15th and finishes on June 10th. NEW.

Eclectica ‘Mechanika’ fob watch-Dragonfly … made by Tiffy Vella. Repositioned in edit mode so that I could wear it as an attachment on my left nipple. Purchased on MarketPlace in May 2015.

lassitude & ennui Foreboding – nipple cover right – gold … made by Jackal Ennui. Purchased at the current round of The Secret Affair, which finishes on June 10th. NEW.

Money fan- Wear it! … made by Precious Restless. It’s part of the Boudoir outfit called “Material Girl”. Purchased in May 2015. NEW.

Pure Poison – Akira Sandals – Brown – Maitreya … made by pety Galaxy. Available now at the current round of The Secret Affair which began on May 15th and finishes on June 10th. NEW.

The pose that I have used is KaTink – 42nd St 5 … made by AnneMarit Jarvinen. This pose was part of the 42nd St set which was a Pose Fair exclusive in April 2015.