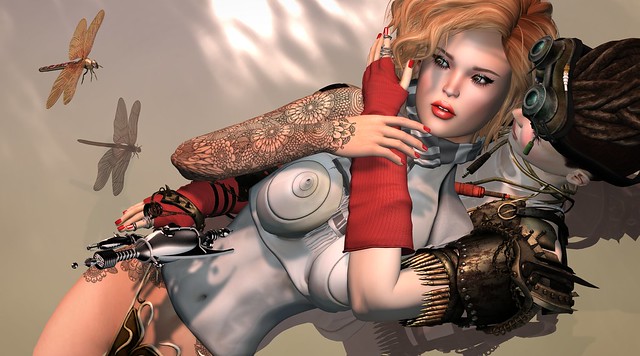 ALLES – who is the “held” person – is wearing the following:

Adjunct – Sail Away Scarf – Stripes (Chest) … made by myvegancookbook Bolissima. This is a freebie that I found on MarketPlace.

WREN – who has the ray gun thingy – is wearing the following:

She’s also holding this *BOOM* Piyo Piyo Gun (tar) … made by Aranel Ah – I guess in order to protect me?

The prop that I have used in this picture is:

.Enfant Terrible. Verelis Dragonfly Hair Gift! Gold … made by LeEnfantTerrible Resident. It’s actually attached to my body but I have moved it so far in Edit mode that it does indeed look like a prop. Available now as a gift at the May 2015 round of We Love Role-Play – yes, it’s a freebie. NEW.

The two-person pose that we used is .GlamRus. Comfort … made by GlamRus Resident. This was tweaked a bit inworld cos I moved my left arm using my Animare HUD. Purchased on MarketPlace in April 2015.