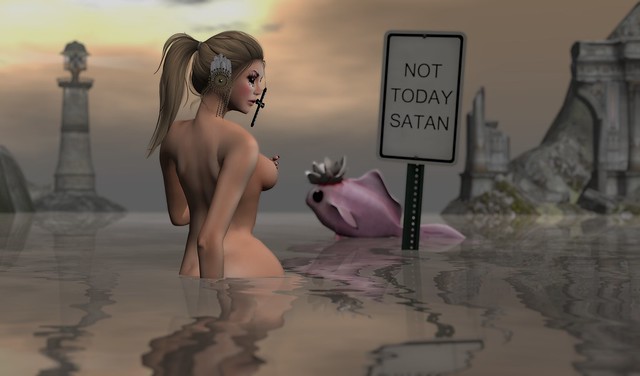 This year’s Pose Fair is already a few days old … and Alles has enjoyed seeing some amazing animations from the pose makers who a Second Life photographer’s life so much simpler!

Amongst the contributors to this year’s event is Mavi Beck, who is the brains behind Ma Vie Poses. She has obviously been a very busy woman these past few weeks as she has produced four sets of individual poses plus three two-person poses for Pose Fair. That’s productive!! 😀

As for other details, Alles is wearing the following:

AZOURY – Sybil Earmuffs (Right) – White … made by Aniki Seetan.
Available now at on9, the “new” event which L’accessories has morphed into. NEW.

floorplan. not today road sign … made by Tegan Serin. This was a Fifty Linden Friday item in April 2015. NEW.

The picture was taken in the beautiful Sarawak SIM and the pose that I used was Ma Vie. – Porcelain 06 … made by Mavi Beck. Available now as part of the Porcelain set at Pose Fair 2015 which will be open until April 25th. NEW.