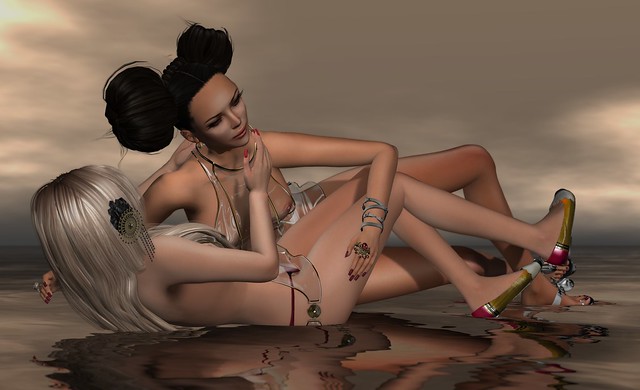 Why do the tango, when you can do the tangle? Which is what Alles and Wren thought as they tackled one of the Pose Fair 2015 offerings from illargi Dover, called “Tickling Male Pose”.

WREN – aka the person on top – is wearing the following:

ALLES – aka the person underneath – is wearing the following:

MINA Hair – Joelle (materials) … made by Mina Nakamura. I am wearing this in a dark blonde tone from the Joelle Fatpack HUD. This hair is available at a 50% discount at The 100 Block Fashion Fair which began on April 9th and finishes on April 30th. NEW.

_MY UGLYDOROTHY -Baby Doll Shape … made by Sopha Portal. Purchased in October 2013 at the DU5 (Designers United 5) event. However the shape has been tweaked by me.

r2 A/D/E sakura[XS]sheer … made by rei2 Aya. Available now at the current round of Collabor88. NEW.

Pure Poison – Crayona Flats – Maitreya … made by pety Galaxy. These must be some of the cutest shoes ever – as you can see they look just like a pencil that you wear on your feet! Available now at on9, the “new” event which L’accessories has morphed into. NEW.