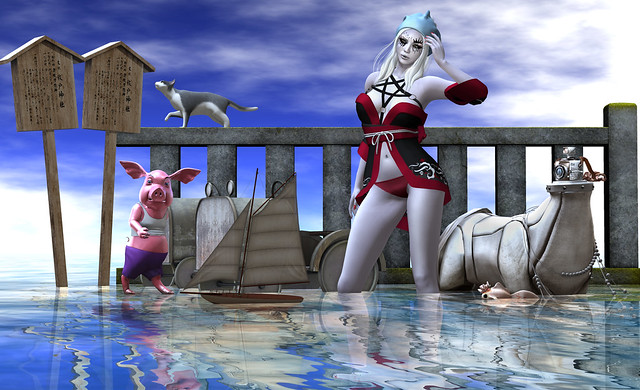 ~Tableau Vivant~ Mokuzai hair // female … made by M4ri1yn Magic. I am wearing this hair in a tone from the Naturals 1 HUD. The headpiece can also be tinted and I have made mine a light blue. Available now at the current round of the Xiasumi School Festival, which is open until April 21st, 2015. NEW.

Lumae :: Adore : Priestess :: Tribal {WhiteBrow} skin … made by Lumiya Rae. Purchased at the April 2015 round of We Love Role-Play which opened on April 4th and will finish on April 30th. NEW.

*katat0nik* (black red) Spoopy Nurse dress for Slink & Maitreya … made by Katat0nik Pidgeon. Available now at the current round of the Xiasumi School Festival, which is open until April 21st, 2015. NEW.

xin. wooden post … made by superjaix Resident. The posts are part of the Shinto Shrine Gacha items at the current round of the Xiasumi School Festival, which is open until April 21st, 2015. NEW.

xin. tamagaki … made by superjaix Resident. This stone fence is one of the Shinto Shrine Gacha items at the current round of the Xiasumi School Festival, which is open until April 21st, 2015. NEW.

Mutresse – Guilty Pig … made by Eeky Cioc. Purchased at the March 2015 round of The Arcade Gacha.

Serenity Style- Rust Old Car … made by Hanstrid Inshan. Purchased at the current round of The Chapter Four event which will be open until April 25th, 2015. NEW.

AF Ralph’s Boat … made by Apple Fall (aka warehousefifteendesigns Resident). The boat is Copy/Modify and I have reduced it in size for this image. Purchased on MarketPlace in March 2015 for just 125 lindens.

{anc} mannequin. MermaidPrincess(Adult)6Li RARE … made by aki69 Resident. Purchased at the February 2015 round of the Fantasy Gacha Carnival.

The pose that I have used is KaTink – Veronica Bonus 1 … made by Maliah Naidoo.

2 thoughts on “Waiting for Sakura”