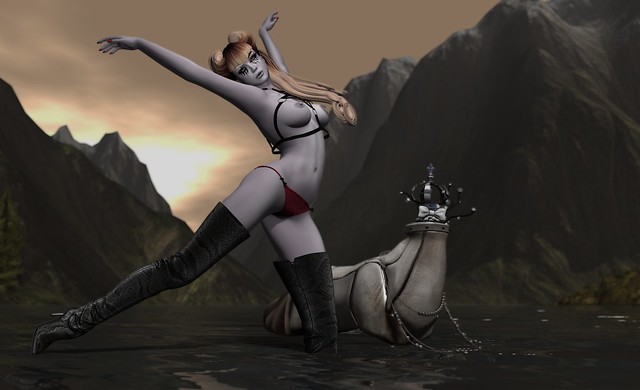 It’s spring somewhere, so Alles has every reason to want to score!! 😀

I took this picture at Lotus Flower (private SIM) which has new surrounds courtesy of Eurydice. I really like having this mountain scenery to play in – it makes me feel like I am in the fjord country of Norway!!

Lumae :: Adore : Priestess :: Tribal {WhiteBrow} skin … made by Lumiya Rae. Purchased at the April 2015 round of We Love Role-Play which opened on April 4th and will finish on April 30th. NEW.

Maitreya Thigh High Boots – Metal Snake L … made by Onyx LeShelle. These were purchased at the February 2014 round of Collabor88 but can be found on MarketPlace now.

{anc} mannequin. MermaidPrincess(Adult)6Li RARE … made by aki69 Resident. Purchased at the February 2015 round of the Fantasy Gacha Carnival.

The pose that I used is KaTink – 42nd St 4 … made by AnneMarit Jarvinen. This pose is part of a 42nd Street Editorial pose set that will be available at Pose Fair 2015. NEW.