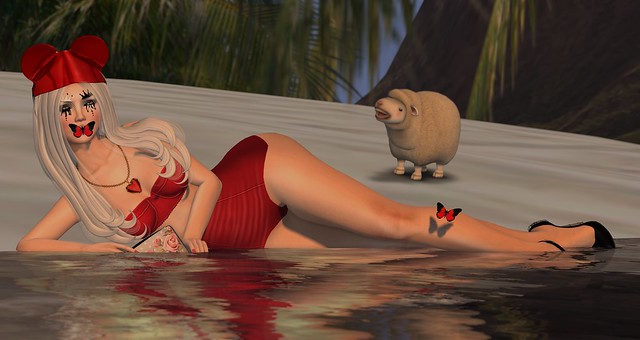 I think that I am in love with the new Mae lingerie set from LACUNA but in order to do it justice, I changed into another shape to make Alles a little more curvy.

MINA Hair – Linda Busty 01 (materials) … made by Mina Nakamura. I am wearing this in a hue from the Black and White Specials. Available now at the latest round of KUSTOM9, which is open from March 15th until April 10th. NEW.

Ariskea [Les Roses ] Clutch [ 1970 ] … made by Diaxm Resident. I am holding it in my right hand. Purchased at the latest round of KUSTOM9, which is open from March 15th until April 10th. NEW.

TA Palms 1a … made by Nico Griffith. Purchased on MarketPlace in March 2015.

The pose that I have used is KaTink – Chuan 04 … made by Maliah Naidoo. However I altered this pose using my Animare HUD to have my legs straight and not bent at the knees.