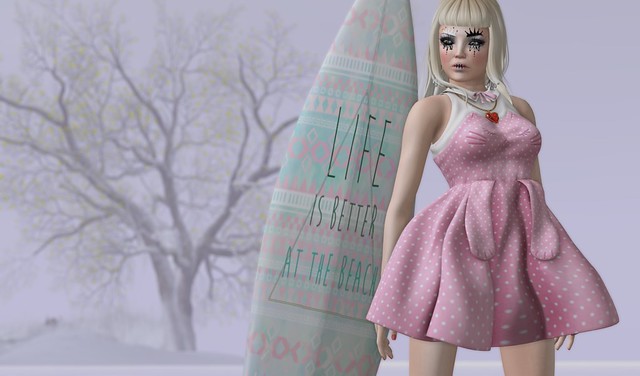 In my Real Life the autumn season has already begun, which means that the days are getting shorter, the temperatures are dropping (thank goodness) and “fall colour” might soon appear on the leaves of some of the street trees. But in Second Life, cos it’s Northern Hemisphere-centric, spring is about to be sprung and Alles is doing her springy bit by wearing pink, of course!! 😀

.~Tableau Vivant~ Theda hair – (S) – FP … made by M4ri1yn Magic. Available now at the latest round of The Fantasy Collective, which began on March 20th and finishes on April 10th, 2015. NEW.

.Atomic. {Vintage Kitten} Set 4 – sm (dress) … made by Ivy Graves. Purchased at The Kawaii Project which began on March 15th and finishes on April 10th. NEW.

The prop that I used is Ariskea// Aloha mesh Surf Board //LIBATB // … made by Diaxm Resident. This was purchased at the Project Limited event in July 2014.

The pose that I have used is