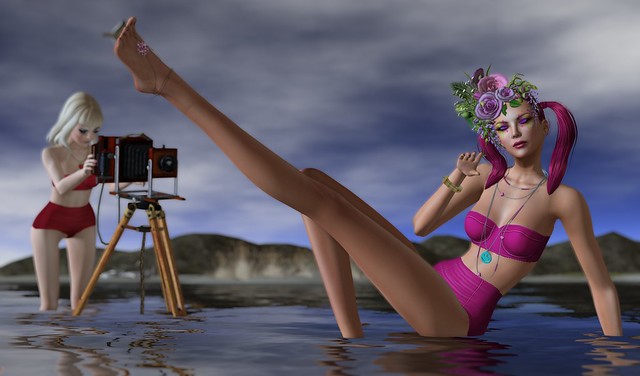 Many thanks to my friend WrenNoir Cerise for being such a good chum at very short notice … this is the two of us in our brand new *LACUNA* lingerie at The Trace, which has newly re-opened for photographers and virtual sunbathers alike.

ALLES – the camera holder is wearing:

.~Tableau Vivant~ Theda hair – (S) – FP … made by M4ri1yn Magic. Available now at the latest round of The Fantasy Collective, which began on March 20th and finishes on April 10th, 2015. NEW.

Boudoir Skull mask w/o mask … made by Precious Restless.

Gold and Crystal bracelet … made for Wren by a friend, zihon3 Resident.

*LACUNA* Mae Bra & Panties – Vivacious … made by LacunaInc Resident. Purchased at the current round of My Attic @ The Deck. NEW.

The prop that I am using is ::TA Bohemian Camera – Copy … made by Nico Griffith. Purchased on MarketPlace in March 2015 for a mere 90 lindens.

The pose that Wren is using is -slouch- pose061 … made by Eira Juliesse. Eira describes her poses as “modelling poses with a twist!” Bought in November 2012.

2 thoughts on “Or When Wren Fell Asleep!”