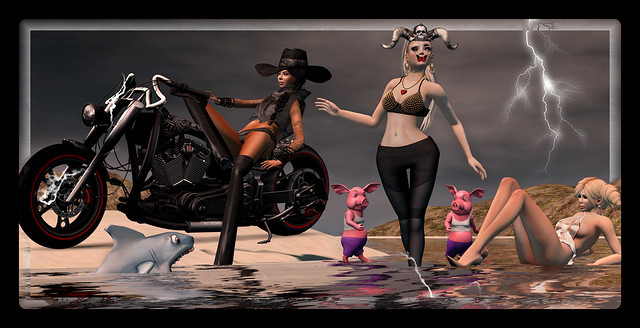 My friends Li Aoki and Sirenity Soon joined me at the newly revamped (and re-opened) destination called The Trace for a fun beach shot with pigs and a shark. As you do in Second Life. This SIM is owned by the extremely generous Kylie Jaxxon, so please be kind enough to give here a donation when you arrive at the arrival point if you come here.

::Axix:: Chaos Mind {Onix} … made by Elise Mannequin. Purchased at the March 2015 round of The Secret Affair which will close on March 30th. NEW.

~Tableau Vivant~ Faux Dreads – The End (F) … made by M4ri1yn Magic. Available now at the March 2015 round of The Secret Affair which will close on March 30th. NEW.

[whatever] spiked bustier – black – S … made by AnnaGrey Resident. Purchased in September 2013.

Dead Dollz Abandon Pants XS … made by Kiddo Oh. Purchased at the March 2015 round of The Secret Affair which will close on March 30th. NEW.

The pose that Sirenity used is {Imeka} Lay Down – Pose 5.