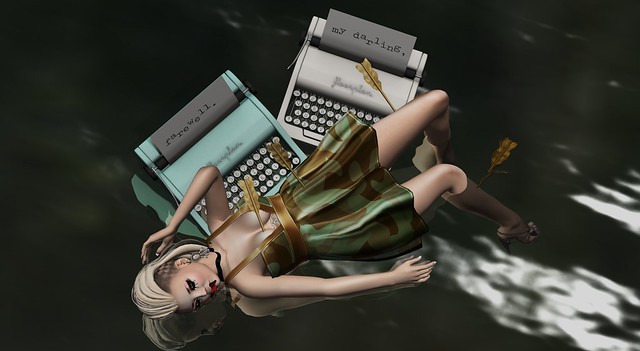 I happened to be playing Frankie Goes to Hollywood while I was doing this picture and the refrain from their 1984 song “War” just got stuck in my head. (Yes, I am kinda ancient – lol!) I should add that I am now listening to Bloc Party from 2007 while I write up this post. Hehe!! 😀

Anyway, the new round of The Secret Affair has now opened and in March 2015 it has an apocalyptic theme, with helmets, masks and lovely dreads being all the go!!

~Tableau Vivant~ Faux Dreads – The End (F) … made by M4ri1yn Magic. Available now at the March 2015 round of The Secret Affair which will close on March 30th. NEW.

!:Lybra:! Papillon necklace ~ add me … made by Natzuka Miliandrovic. This looks more like a choker here but the butterfly is definitely visible on my back.

LaGyo_Metis arrows in Gold … made by Gyorgyna Larnia. The arrows were available as a three-arrow set in gold or silver at the August 2014 round of Collabor88.

AZOURY- LAZARUS – Silver (The Mesh Project) shoes … made by Aniki Seetan. Available now at the current round of The Chapter Four event, which started on March 4th. I am wearing them at the Ouch! setting. NEW.

And lastly, the pose that I used is double take: biding time … made by Valena Vacano. However I did a modification of the pose using my Animare HUD so that my legs were no longer crossed and my left hand was further from my head.