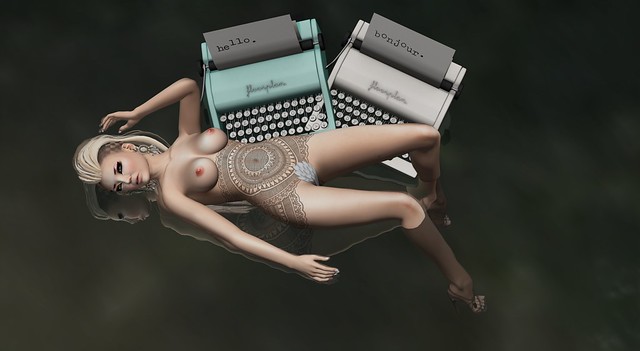 In which Alles is weighed down by the devil on her back … thank goodness there is some water for her to lay down in!! 😀

~Tableau Vivant~ Faux Dreads – The End (F) … made by M4ri1yn Magic. This is available at the March 2015 round of The Secret Affair which opens on March 15th. NEW.

*Cila*Ariel Thong Silver … made by comilla1023 Resident. Purchased at the January/February 2015 round of The Fantasy Collective.

AZOURY- LAZARUS – Silver (The Mesh Project) shoes … made by Aniki Seetan. Available now at the current round of The Chapter Four event, which started on March 4th. I am wearing them at the Ouch! setting. NEW.

And lastly, the pose that I used is double take: biding time … made by Valena Vacano. However I did a modification of the pose using my Animare HUD so that my legs were no longer crossed and my left hand was further from my head.