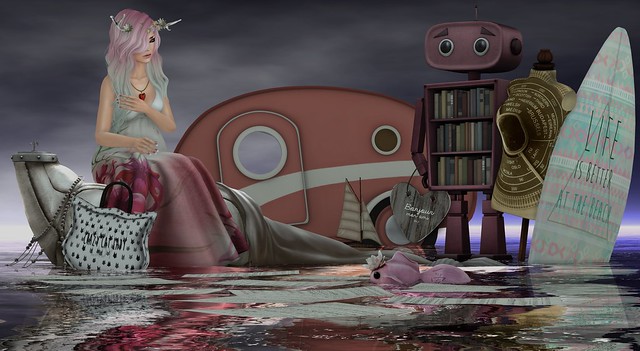 In which Alles exchanges glances with some of her admirers – in this case a robot, a dress form mannequin and a little pink fish!! Well, one can’t be too choosy!! 😀

Coy Alles is wearing the following:

.Olive. the Snow Princess Hair -FullSet RARE … made by naminaeko Resident. This hair was a gacha item at the December 2014 round of The Arcade Gacha.

Ariskea [Pot Pourri] Antler of Love headband … made by Diaxm Resident. Purchased at the March 2015 round of The Arcade Gacha. NEW.

French Manicure Lighter Tones TMP RP NP … made by MissEm Boa. These are the nails that I am wearing with my TMP body. Purchased on MarketPlace.

Zaara : Ritika Maxi dress (XS) *bloom* … made by Zaara Kohime. Purchased in September 2014, when Zaara was having its annual sale.

The props that I used in this picture are as follows:

Ariskea [ Cat Lady ]Crazy Cat lady … made by made by Diaxm Resident. Purchased at the February 2015 round of Kustom9. NEW.

Ariskea [ Pot Pourri ] Little Sign … made by made by Diaxm Resident. Purchased at the March 2015 round of The Arcade Gacha. NEW.

Dress Form Radio … made by Spirit Eleonara. I purchased this at Erotigacha 4 “Way Back Winter”, which opened at Retroville on March 6th, 2015. NEW.

Ariskea// Aloha mesh Surf Board //LIBATB // … made by Diaxm Resident. Purchased at Project Limited in July 2014 and due to the nature of that event, unavailable now.

floorplan. scattered sheet music … made by Tegan Serin. It’s the bits of paper scattered on the surface of the water in the foreground of the picture.

The pose that I used is elymode: Forgive Me 1b … made by Elysium Eilde. I did a slight modification of the pose using my Animare HUD so that my right arm rested on my lap/right thigh.