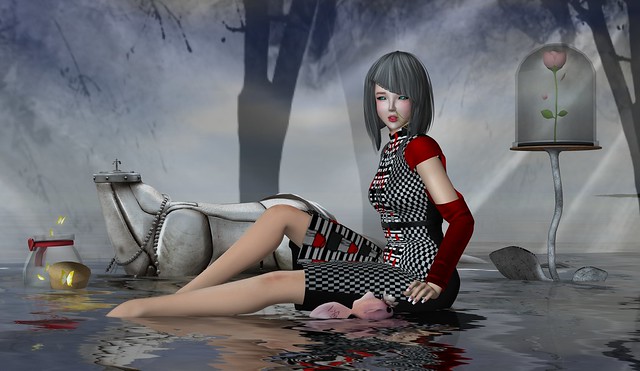 I haven’t really tried a mesh head up until these past few days. Of course you feel rather different when wearing it (where did Alles go?) but in the end it was a fairly pleasant experience once I got the hang of wearing it with my TMP mesh body!! 😀

MINA Hair – Spice – Black & Grey … made by Mina Nakamura. I purchased this at the February 2013 round of My Attic @ The Deck but since then it has become available at both the MINA store inworld or on Second Life MarketPlace.

[BODY FACTORY] Nose Chain (Gold) L … made by Deco Olinger. Purchased at the 5th Avenue event which was open from February 20th through until March 2nd. Discount price.

{AnaMarkova}Fashion Art: Warhol- Lipstick XS … made by Anastacia Markova. Purchased at the Fashionart Event, which is sponsored by iNOVARE Magazine at Moonlight Delight. This event which is a Second Life designers’ tribute to Frida Kahlo and Andy Warhol, will be open through until March 20th. NEW.

This is the main landing point for the event:
http://maps.secondlife.com/secondlife/Moonlight%20Delight/60/140/2011

And this is the SLURL for the {AnaMarkova} stall:
http://maps.secondlife.com/secondlife/Moonlight%20Delight/77/95/2079

The props that I have used in this image are: