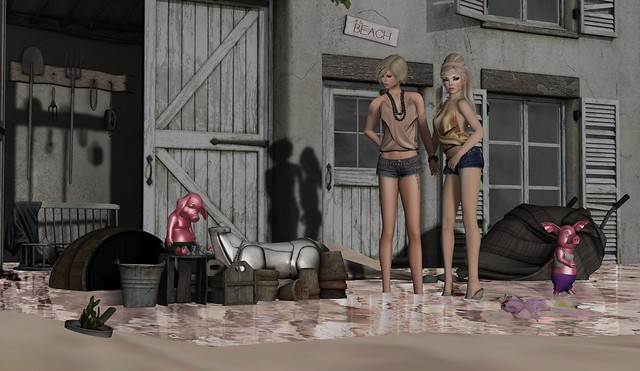 Because the results can be totally catastrophic!! 😦

MISCHA, on the left, is wearing the following:

ALLES, on the right, is wearing the following:

[BODY FACTORY] Nose Chain (Gold) L … made by Deco Olinger. Purchased at the 5th Avenue event which was open from February 20th through until March 2nd. Discount price.

Maitreya Lisbon Top * Golden * Lara Mesh Body … made by Onyx LeShelle. NEW. Surprisingly, I was able to wear this with my TMP mesh body without any problems.

The props that were used in this picture are as follows:

Apple Fall Rural Farmhouse RARE … made by warehousefifteendesigns Resident. This was a gacha purchase at the current round of The Chapter Four, which started on March 4th. NEW.

{what next} Beach Sign 1 … made by FrankLee Anatra. Purchased on a gacha machine at Hodgepodge in April 2014.

{anc} mannequin. MermaidPrincess(Adult)6Li RARE … made by aki69 Resident. Purchased at the current (February, 2015) round of the Fantasy Gacha Carnival. NEW.

Mutresse – Wasted Pig … made by Eeky Cioc. Purchased at the March 2015 round of The Arcade Gacha. NEW.

Apple Fall Potting Shelf … made by warehousefifteendesigns Resident. This was a gacha purchase at the current round of The Chapter Four, which started on March 4th. NEW.

Mutresse – Guilty Pig … made by Eeky Cioc. Purchased at the March 2015 round of The Arcade Gacha. NEW.