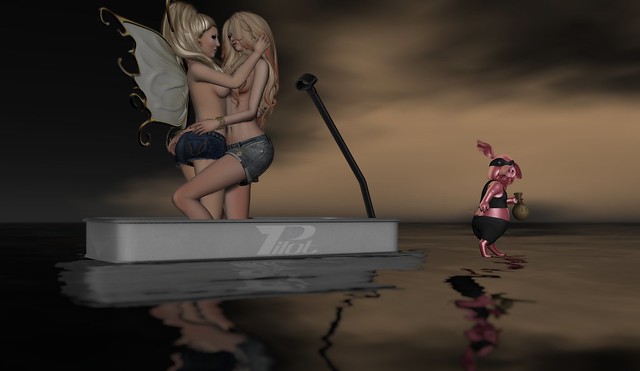 Second Life can be a place of mystery and intrigue – which might explain why our vessel’s “pilot” ran away with the loot whilst leaving Rachel and I in a clingy embrace in the midst of the Black Kite Sea!! 😀

So what is happening here in terms of fashion?

ALLES, on the left, is wearing the following:

MINA Hair – Ariana – Natural (materials) … made by Mina Nakamura. I’m wearing this in a light blonde tone. Available now at the latest round of the The Chapter Four event which opened on March 4th, 2015. NEW.

Luas Altair Eyepatch Golden … made by AinaraLuas Resident. Purchased at the current round of The Fantasy Collective which will be open through until March 13th. NEW.

Pendant(A) [MANDALA]Pearl-Rain-Season3(WHITE) … made by made by kikunosuke Eel. Purchased at the current round of the Shiny Shabby event which will be open through until March 15th. NEW.

*{Junbug}* Fae Wings [Ivory] … made by Juno Mantel. This was a gacha item at The Secret Affair in November 2014 but I bought them at a gacha sale in March 2015.

RACHEL, on the right, is wearing the following:

That’s all you can see!

PILOT – Wagon [SILVER] … made by Kaz Nayar. I used it as a big sardine can!! Purchased at the March 2015 round of The Arcade Gacha. NEW.

Mutresse – Robber Pig … made by Eeky Cioc. Purchased at the March 2015 round of The Arcade Gacha. NEW.

The pose that we used is *elymode* Pinned-up pose set f/f … made by Elysium Eilde. However I edited the pose using my Animare HUD so that my right hand appeared to be stroking Rachel’s hair, rather than being at her side.

One thought on “Drop The Pilot”