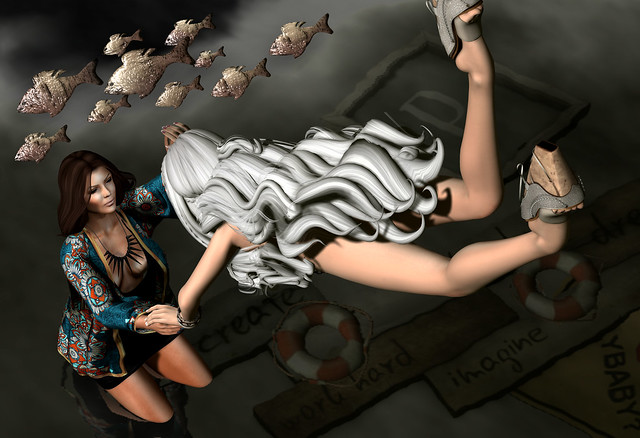 So, in this picture which I shot in the Black Kite SIM, what are we wearing?

ELLE – on the left – is wearing the following:

Foxes – Spiritualist – Kimono – Tranquil … made by Tyr Rozenblum. Available at the current round of the No21 event, which will be open through until March 14th. NEW.

.Olive. the Shiny Hair – HUD 1 … made by naminaeko Resident. Purchased at the August 2014 round of Collabor88.

[BODY FACTORY] Nose Chain (Gold) R … made by Deco Olinger. Purchased at the 5th Avenue event which is open from February 20th through until March 2nd. Discount price.

Azteca Collar Gold … made by Eifee Resident. Purchased at the February 2015 round of The Fantasy Room. NEW.

Glam Affair – Bangles Set (L) Cream … made by Amberly Boccaccio. This was available at the February 2015 round of FaMESHed. NEW.

LUAS ALTAIR SET GOLDEN & BLACK … made by AinaraLuas Resident. Purchased at the current round of The Fantasy Collective which will be open until March 13th. NEW.
Luas Altair Bra Black Golden and Luas Altair Thong Black Golden.

AZOURY – VITA Heels – White (The Mesh Project) … made by Aniki Seetan. Available now at the current round of Shiny Shabby, which will be open until March 15th. NEW.

Pure Poison – Fishie Fish DECO … made by Shaleene Kenin. This was a Fifty Linden Friday item on February 27th, 2015. NEW.

:CP: Poppy Inspirational Sign … made by Isla Gealach. Purchased at the current round of the No21 event, which will be open through until March 14th. NEW.

Jellybaby – Dr Who Warning Signs … made by Further Monday. Purchased on MarketPlace in December 2014.

The pose that we used is double take: with the wind … made by Valena Vacano. Purchased in February 2015. I did a slight modification to the pose using my Animare HUD – on my left elbow and hand.