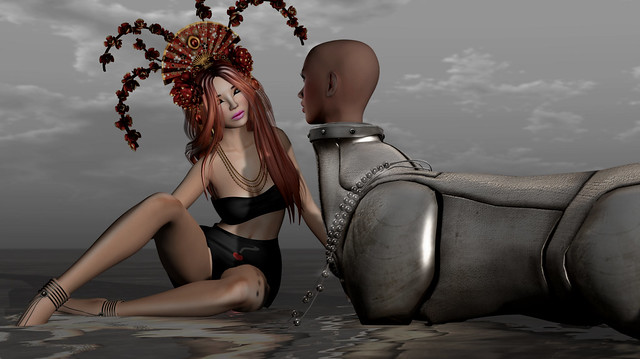 Hi and welcome to girltalk! We’re a mom and three daughters talking about biblical womanhood – how to adorn the gospel of Jesus Christ as a Christian woman, a Christian wife, and a Christian mother – and other fun stuff.

Hang on, that’s completely the wrong pitch for Alles although I did find it in the About section of website that called itself GirlTalkHome. Oh dear, the things that you can find on the internet when you do a bit of searching!! 😀

But in this case the girl talk is going on between Alles and her ‘friend’ Eve and I can assure you that the gospel of Jesus Christ did not get discussed at all!!

=Zenith=Breeze Painted Fungus & Flower Headdress A – RARE … made by Miffyhoi Rosca. I got this at the current round of the Fantasy Gacha Carnival. NEW.

MINA Hair – Elisa (materials) … made by Mina Nakamura. I am wearing this in a redhead tone from the Essentials pack and cos the hair is Materials enabled, it has a slight glow on the highlights as I had activated rendering of screen space reflections in Firestorm. Available now at the February 2015 round of KUSTOM9. NEW.

[ MUDSKIN ]_Matte Lip6_Pale … made by Sopha Portal. Purchased at the February 2015 round of The Chapter Four. NEW.

*PROMAGIC* Anklet 3 (Slink High)- Silver … made by Promagic Resident. Purchased at the February 2015 round of The Chapter Four. NEW.

*!*EVE-head-4c lips open … made by Ginger Chevalier. Available at the Absolut Creation store in Second Life.

{anc} mannequin. MermaidPrincess(Adult)6Li RARE … made by aki69 Resident. Yes, it’s the shiny body under the EVE mesh head. And I got this item at the current (February, 2015) round of the Fantasy Gacha Carnival. NEW.

One thought on “And Then He Said”