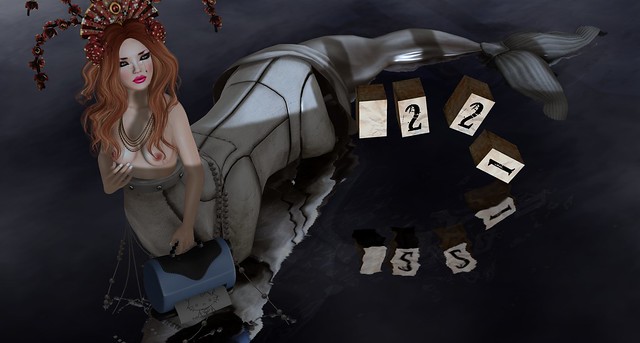 Well, he did say that but sadly all I got was an annoying presence from another male avatar who decided that my mermaid hips was a good place to sit. Pfft!!

~Tableau Vivant~ Shiny hair (XS) … made by M4ri1yn Magic. I’m wearing one of the Naturals I tones – and yes, I’m still a redhead! Tableau Vivant have two styles of hair available at the Shiny Shabby event, of which this is one. NEW.

AZOURY – Mon petit sac (Blue) – (Left Hand) … made by Aniki Seetan. Available now at the February 2015 round of The Chapter Four. NEW.

{anc} mannequin. MermaidPrincess(Adult)6Li RARE … made by aki69 Resident. While it may look like I am wearing the prop, I merely positioned it so I could wiggle myself into where the missing head would have been. NEW.

Paper Falling Clock … made by Pandora Popstar of LISP. Edited by me to unlink the board that the numbers rested on.