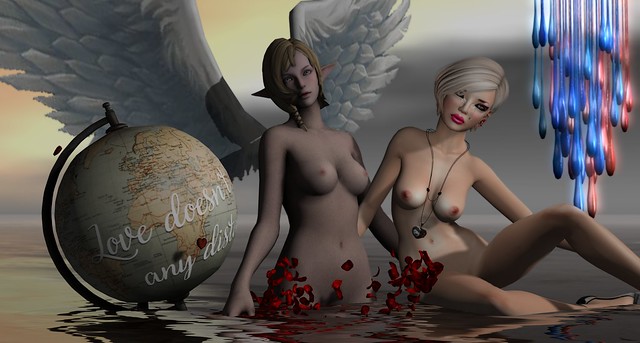 Featuring Alles Klaar as the human element in this rather odd couple (I’m on the right, of course) and a winged sylph as my lover from an alien world. ‘Tis a pity that she’s a bit stony in the personality department though!!

Alles is wearing the following stuffs:

[e] Cassidy hair – whites … made by Elikapeka Tiramisu. Purchased at the [elikatira] store inworld in February 2015 for just 99 lindens.
http://maps.secondlife.com/secondlife/Elikatira/80/128/37

^^Swallow^^ StreamPunk Heart (Woman) necklace … made by luciayes Magic. This was available as an exclusive at Love Is In The Air from February 7th-14th. NEW.