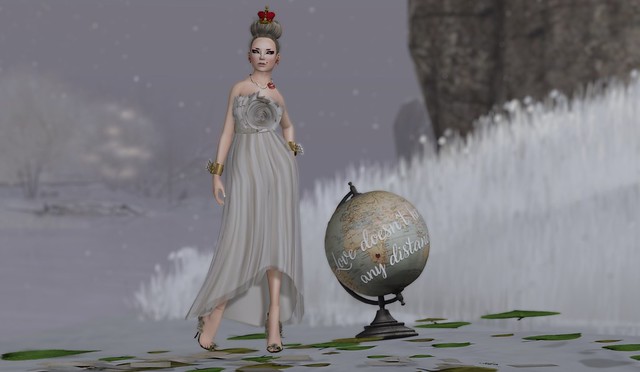 There are only two days left of the Love Is In The Air event in Second Life and if you haven’t been yet, then it’s time now to make your way there before it finishes. In this post I am wearing the Cecelia Dress which was made for the event by the host, Giz Seorn of GizzA Creations. And like everything she makes it’s another marvel – as delicate and feminine as the suggestions of romantic fashion should be.

I shot this picture in the UMBRAL SIM at Hydra Isles which is currently in a very wintery mode (complete with falling snow) and certainly influenced my Winter Queen styling.

So, what is Alles wearing?

[LWL] Crown (Dark Queen, red) … made by Faint Paulse. I’m wearing it cos I am the Winter Queen, of course. This was a gacha item at The Arcade Gacha in December 2013.

Pure Poison – Rose Romance Earrings … made by Shaleene Kenin. Available as part of a set with the accompanying necklace. NEW.

*+Crie Style+* Voglia(Platinum) … made by Grazioso Alekseev. It’s the gorgeous eye-wear that’s sitting on the bridge of my nose. Available now at the Love Is In The Air event from February 7th-14th. NEW.

Clef de Peau:Liu:Honey Base CL skin … made by marcopol Oh. Available at the Love Is In The Air event from February 7th-14th. NEW.

GizzA – Cecelia Dress [Cream] Size XS … made by Giz Seorn. Available now at the Love Is In The Air event. NEW.

[MANDALA]Odyssey-Bracelet set-Artemis(White) … made by by kikunosuke Eel. The bracelets were purchased at the August 2014 round of Collabor88. Available now on MarketPlace and inworld at the Mandala store, along with a matching set of earrings and the Odyssey necklace.

GizzA – L’amour Heels [Cream] … made by Giz Seorn. Available now at the Love Is In The Air event. NEW.

And for all those who want it easy, this is your taxi to Love Is In The Air:

The prop that I used is {vespertine} painted globe / love bx. … made by Amelie Knelstrom. This was a Fifty Linden Friday item on Friday, February 6th 2015.

The pose that I used is Corpus . 030 … made by Diconay Boa. I purchased a huge set of poses at Corpus in January 2012 but this pose is most likely not available anymore as it was a sale item before a new pose range was introduced at Corpus.

2 thoughts on “The Snow Queen is Looking for Love”