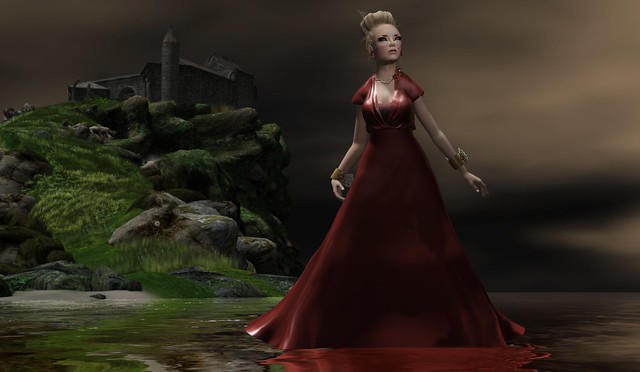 It could be a scene from an historical novel in which a young beauty in red is running away from an evil lord in a castle but actually it’s just Alles in this beautiful outfit from Zaara, that’s available now at Love Is In The Air! 😀

And this is what Alles is wearing from top to toe:

Pure Poison – Rose Romance Earrings … made by Shaleene Kenin. Available as part of a set with the accompanying necklace. NEW.

*+Crie Style+* Voglia(Platinum) … made by Grazioso Alekseev. It’s the gorgeous eye-wear that’s sitting on the bridge of my nose. Available now at the Love Is In The Air event from February 7th-14th. NEW.

Clef de Peau:Liu:Honey Base CL skin … made by marcopol Oh. Available at the Love Is In The Air event from February 7th-14th. NEW.

Zaara : [Mesh] Amira gown (XS) *ruby* … made by Zaara Kohime. Available at the Love Is In The Air event from February 7th-14th. NEW.

[MANDALA]Odyssey-Bracelet set-Artemis(White) … made by by kikunosuke Eel. The bracelets were purchased at the August 2014 round of Collabor88. Available now on MarketPlace and inworld at the Mandala store, along with a matching set of earrings and the Odyssey necklace.

Eudora 3D Dahlia Pumps right (materials) … made by Eudora3D Resident. Available now at the Love Is In The Air event. NEW.

The pose that I used is Corpus . 012 … made by Diconay Boa. I purchased a huge set of poses at Corpus in January 2012 but this pose is most likely not available anymore as it was a sale item before a new pose range was introduced at Corpus.

3 thoughts on “The Lady of Annon”