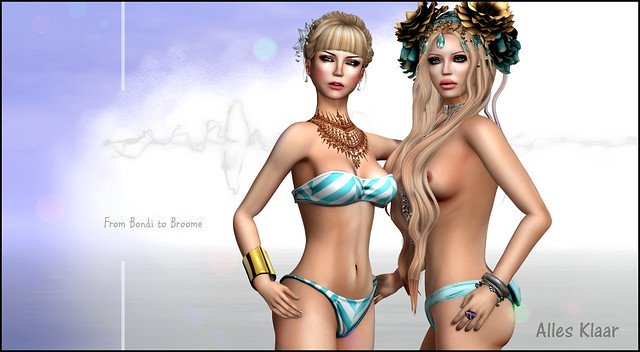 Cos it’s Australia Day on Monday (January 26th), my dear friend Eurydice and I got together to do an Aussie girls picture on a Second Life beach using a two-person pose titled … Aussie Girls!! 😀

Alles on the left is wearing the following:

Eurydice on the right, is wearing:

Bikini is by Boom in Tiffany, the skin is Artemis by Glam Affair, Wreath by Zenith, Eyes by Ikon, Jewellery by Zaara, Hair by Entwined
the ring I was wearing is by LaGyo – it’s called Nymph. I don’t want to leave it out she makes such pretty things.

The pose that we used is ILAYA Aussie Girls … made by Ilaya Allen.

One thought on “The Bikini Blondes of Black Basalt Beach”