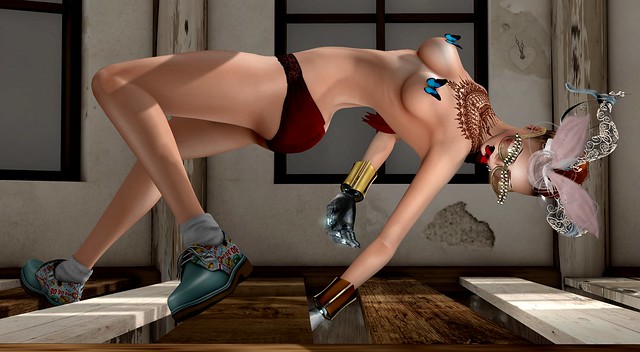 I took this picture inside Whiskey Monday’s art installation at the LEA10 SIM. You can see what her build looks like on the outside here: https://www.flickr.com/photos/whiskeymonday/16135641400/

And for the record, Alles is wearing the following:

::c.A.:: Flavie *Pink* … made by YukaChoco Magic. It’s the pink headpiece that looks a bit like bunny ears. Available now at The Seasons Story. NEW.

8f8 – Renaissance Horns – GLASS … made by iBi aka 8f8 Resident. These were first available at The Fantasy Collective in October 2014 but can now be purchased at the 8f8 store inworld on the Black Kite SIM.

Pure Poison – Opulence Sunglasses … made by Shaleene Kenin. Available now at the January round of Uber. NEW.

AZOURY – Pure Papillon ( Red) … made by Aniki Seetan. Available now at the January 2015 round of The Secret Affair. NEW.

AZOURY – Pure Papillon ( blue) … made by Aniki Seetan. Available now at the January 2015 round of The Secret Affair. NEW.
NB: I made copies of the butterfly and then attached one to my left shoulder and another to my right shoulder, then edited into position as er, pasties! 😀

*YS&YS Oxford Shoes 21S … made by Monicuzza Babenco. These were only available on January 21st, 2015 as part of the 21Shoe event. NEW.

The pose I used is BELLES FEMMES [ Kneeling Pose ] … made by kesmyas Resident. However, I edited the pose so that it had a different orientation from the original version and then further edited with my Animare HUD which moved my legs and left hand into positions that I desired.