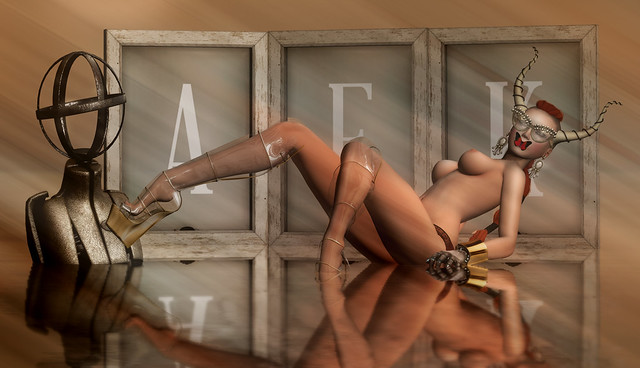 Just some quick details on what I am wearing and the props that I used.

Alles isn’t wearing much actually but she did squeeze herself into the following:

AZOURY Ingenu Mask (White) … made by Aniki Seetan. What you can see of the “mask” in this picture is the horns that are attached to it, as I moved the mask itself in Edit so that it was not visible. This item is available now at The Secret Affair for the sweet price of 119 lindens. This round of The Secret Affair will be open from January 15th through to January 29th. NEW.

Pure Poison – Opulence Sunglasses … made by Shaleene Kenin. Available now at the January round of Uber. NEW.

AZOURY – Pure Papillon ( Red) … made by Aniki Seetan. Available now at the January 2015 round of The Secret Affair. NEW.

r2 A/D/E kagetsu boots[L]sheer … made by rei2 Aya. Purchased at the November 2014 round of Collabor88 but probably available at the R2 store now.

[Commoner] Monogram Window Art / A F K … made by Emery Milneaux. These were available at the December 2014 round of The Arcade Gacha.

RO – Dress Form – Materials … made by AxsisThorn Resident. This was a Remarkable Oblivion group gift in April 2014. It may still be available?

The pose that I used is The Burlesque3, from the Burlesque Set … made by JackZC Resident (aka ZERO RED THIRTY).

One thought on “Alles Has Gone AFK”