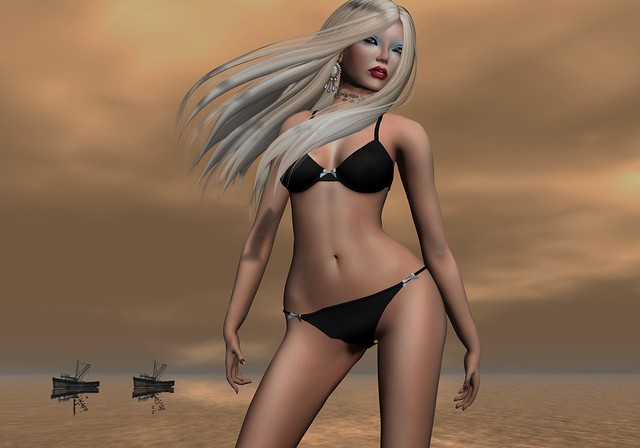 Well, as I mentioned in my Flickr post, I am wearing the new Maitreya Mesh Body called Lara which was released in the last twenty-four hours or so. As a regular wearer of mesh bodies, the Lara body is a revelation which can be neatly summed up in just three little words – No More Gaps!

Up until now my mesh body of choice had been the TMP mesh body from The Shops but while I loved that body there was always a problem in that when I wore my Slink hands there was a gap of about a centimetre or two between where the mesh arm ended and where the Slink hand began. Obviously impossible in Real Life it was also quite annoying in Second Life as it always meant that I had to wear a big, chunky bracelet with the TMP body whenever my arms were bare and I was wearing Slink hands.

I should note here that the Maitreya body also includes a set of hands and feet of its own (like the TMP body) but for someone who had invested lots of lindens on Slink hands and feet as well as buying Slink-compatible footwear, it’s nice to be able to flaunt them when you are in your mesh body.

In addition, the Lara body also has the following features. Firstly, it has an alpha HUD which enables you to “remove” parts of the mesh body so that mesh clothing will fit seamlessly onto your mesh body, and secondly there is a free set of Maitreya lingerie that fits the Lara body that is colour customisable via a separate HUD.

Anyway, this is what I am wearing in this picture:

~Tableau Vivant~ Breeze – regular – blonds … made by M4ri1yn Magic. This is available at the Creation.jp event which began on December 20th and will be open until January 15th, 2015. NEW.

(L)_Earring [MANDALA]Odyssey-Artemis(White) … made by kikunosuke Eel.
(R)_Earring [MANDALA]Odyssey-Artemis(White) … made by kikunosuke Eel.
The earrings were purchased at the August 2014 round of Collabor88. Available now on MarketPlace as part of an Odyssey jewellery set which includes an accompanying necklace.

Zaara : Banjara silver choker … made by Zaara Kohime. Purchased at the November 2014 round of Collabor88.

:{MV}: Hellraiser Heels Black (L) and (R) … made by Lokii Violet. Purchased at the CarnEvil event in Second Life. NEW.

I took this picture in the Frisland SIM using a tweaked version of Annan Adored’s Darkness sky setting.

Lastly, the pose that I used is oOo sexpot_one … made by Olaenka Chesnokov. Purchased in August 2014.

One thought on “Look What Santa Bought Me”