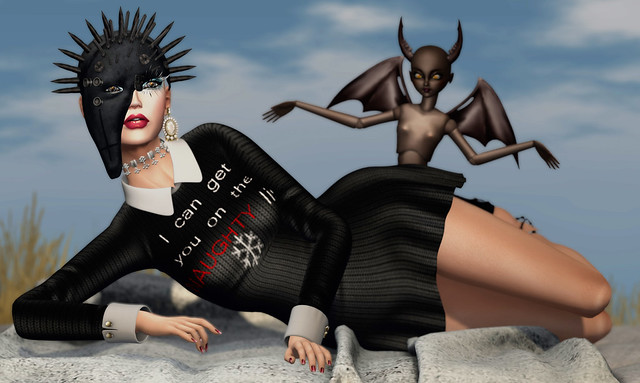 Second Life has become a tad nightmarish for shoppers this past year – hasn’t it dear readers – what with so many events and so many clothes and yes, so little time to wear all of these clothes or even to get to the events.

Which meant that I almost missed out a rather spooky event called CarnEvil which started its first round on Saturday, December 13th … and cos it’s a bi-weekly event will be finishing very, very soon.

Amongst the tattoos and the other interesting stuffs, I found a delightful mask made by deannanastie13 Resident and a wonderful black dress which is just perfect for this “holiday season” – well, for those of us who want to yell, Bah Humbug!! 😀

So what is Alles wearing in this picture?

(L)_Earring [MANDALA]Odyssey-Artemis(White) … made by kikunosuke Eel.
The earrings were purchased at the August 2014 round of Collabor88. Available now on MarketPlace as part of an Odyssey jewellery set which includes an accompanying necklace.

Zaara : Banjara silver choker … made by Zaara Kohime. Purchased at the November 2014 round of Collabor88.

For more information about the CarnEvil event check their website:
http://carnevilevents.blogspot.com.au/

Baiastice_BJD Collection-Devil … made by Baiastice Resident. This is a gacha item from the December 2013 round of The Arcade Gacha. Which means that if you are really, really lucky you might find it at a YardSale. Perhaps.

Trompe Loeil – Snow Day Bed White + Drape PG … made by Cory Edo. Purchased at the current round of Collabor88. NEW.

The pose that I used is KaTink – Chuan 04 … made by Maliah Naidoo.