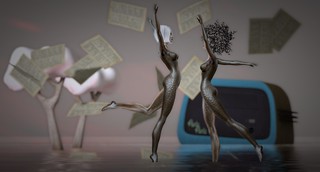 ***ArisAris Vintage decorative radio4 MESH … made by Ariadna Garrigus. Purchased in September 2012. While the original version of the radio is fairly big – I made it even bigger for this picture.

The two-person pose that Caitlin and I have used in this picture is KaTink – At Last! … made by AnneMarit Jarvinen. NEW.