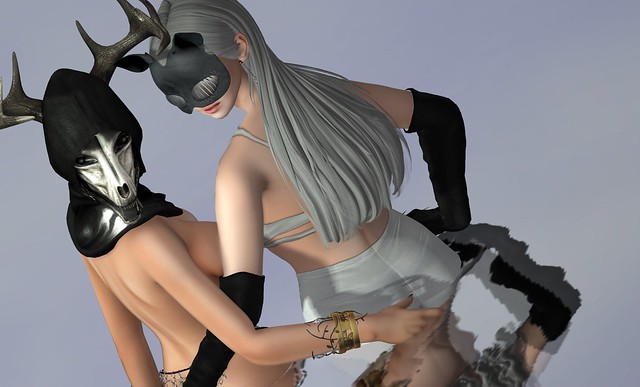 Alles on the left is wearing the following:

[Deadwool] Oberon mask – full set (deer horns) – fem size 1 … made by Masa Plympton. Purchased at the current round of Uber which began just after midnight on October 30th, 2014. NEW.

(Wear Me!) (Body/Hands/Feet) … made by TheShops Resident. It is the alpha layer for the mesh body.

Glam Affair – Artemis – America – Cyber Princess 02 A … made by aida Ewing. Purchased in September 2014. It’s the skin I am in but as I am wearing a mesh body and a full mask over my head and neck, it’s a bit hard to see it!! 😀

[The Forge] Crystal Vine Bracer, L + R (cuffs) … made by Deccan Arida. Purchased at the October 2014 round of Tales of Fantasy. NEW.

.:EMO-tions:. * UNA * SLIP silver … made by Mirja Mills. It’s the er, bikini bottom that I am wearing and is part of a four-piece swimsuit in either silver or gold. Purchased in September 2014.

Amechan on the right is wearing the following:

.aisling. Pendulum Earring L and R … made by

Baiastice_Long gloves with claws-black … made by Sissy Pessoa. Available now at the current round of Uber which began just after midnight on October 30th. NEW.

The pose that we have used is Ka-Tink – Summer Rhyme … made by AnneMarit Jarvinen. This is actually a three person pose but I made the third ball transparent, so we posed as two people only.