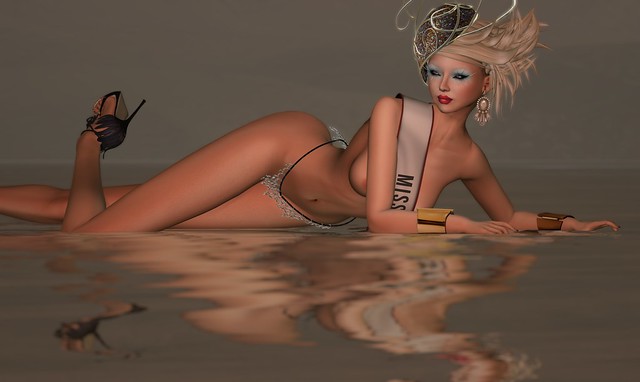 I took this picture in my dear friend Eurydice’s SIM which is called Lotus Flower … and hence the title of the image and the blog post. Well, a girl’s gotta dream, can’t she!! :xD

So what exactly is Alles wearing?

.:EMO-tions:. *MIMI * hair … made by Mirja Mills. I am wearing a colour tone from the blonde-pack. NEW.

DeeTaleZ shaved chess hairbase … made by Steffi Villota. Purchased on MarketPlace in July 2014.

(L)_Earring [MANDALA]Odyssey-Artemis(White) … made by kikunosuke Eel.
The earrings were purchased at the August 2014 round of Collabor88. Available now on MarketPlace as part of an Odyssey jewellery set which includes an accompanying necklace.

.:EMO-tions:. * UNA * SLIP silver … made by Mirja Mills. It’s the er, bikini bottom that I am wearing and is part of a four-piece swimsuit in either silver or gold. NEW.

lassitude & ennui Nevermore heels (Slink HIGH) – black … made by Jackal Ennui. Purchased at the September 2014 round of The Secret Affair, which sadly has just finished. NEW.

The pose that I used is KaTink – Chuan 08 … made by Maliah Naidoo for KaTink.

3 thoughts on “The Lotus Dreamer”