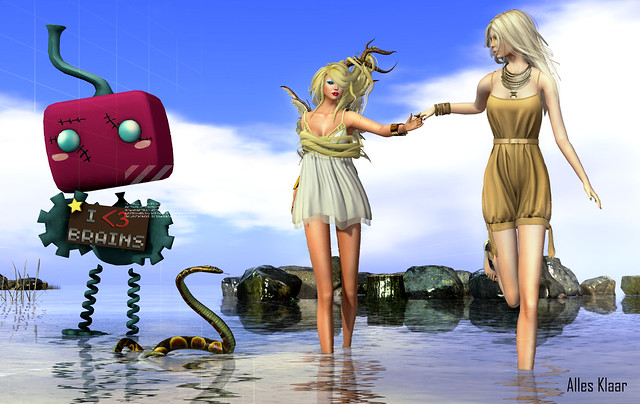 In which Alles and Bea teamed up for a picture at Starfall’s Twilight’s Edge Summer Retreat.

Alles – in the middle – is wearing this:

(L)_Earring [MANDALA]Odyssey-Artemis(White) … made by kikunosuke Eel.
(R)_Earring [MANDALA]Odyssey-Artemis(White) … made by kikunosuke Eel.
The earrings were purchased at the August 2014 round of Collabor88. Available now on MarketPlace as part of an Odyssey jewellery set which includes an accompanying necklace.

Pure Poison – Broken Wings … made by Shaleene Kenin. Available now at the current round of The Secret Affair, which finishes on September 29th. NEW.

Bea (Beatrice) on the right is wearing:

The pose that we used is Sari-Sari – Stay … made by AbbyAnne Resident. Purchased at the September 2014 round of the Level Up sales event, which this quarter has a Survival/Horror theme. That event is open from September 18th through until October 5th. NEW.

2 thoughts on “The Runaway Blondes”