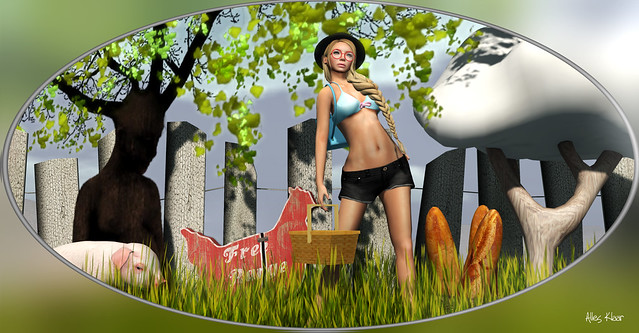 The Seasons Story will end its summer run on Thursday, July 31st so you had better get in quick to grab some of the rather cute goodies before this round finishes.

In this picture I have used a variety of props and of course, one of them does come from that event. So what do we have?

mother tree screen with Love from TRYST … made by Xia Firethorn. (Gifted to me.)

junk. fresh eggs sign. … made by Tab Tatham. Available now at The Seasons Story. It’s actually one of three signs that are on sale and I bought the lot of them!! NEW.

goodie basket made by Xenon Linden … acquired in June 2008.

Bread Basket … made by Pandora Popstar. Purchased at her LISP store in January 2012.

:Fanatik Architecture: GRASS … made by Kendra Zaurak. A group gift in June 2014.

As for the human element in this picture, Lilly is wearing the following:

Glasses – .:Lil Things:. Reading glasses – Red … made by hers truly! These will be a hunt item in the Cupcakes Anonymous Hunt, which runs from August 1st-31st.

The pose that Lilly is using is Girl Fever 10 … made by Mavi Beck. You can find all of Mavi’s poses at her Ma Vie Poses store inworld.