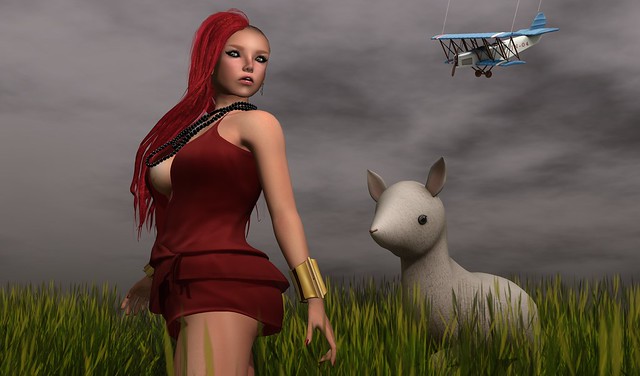 Well I’m not so sure if it’s still a “little lamb” but it is a cute addition to my picture!! 😀

For this post I have combined goodies that can be acquired right now at Hair Fair, The Seasons Story and The Liaison Collaborative along with some older stuffs from my over-burdened inventory.

So from top to bottom, Alles is wearing this:

~Tableau Vivant~ Dreads line – Darcy – F (S) … made by M4ri1yn Magic. Available now at Hair Fair but you better get there quick as the event closes on July 27th. This hair comes with a colour change HUD and I tinted it to match my silk romper. Naturally. NEW.

.:EMO-tions:. * PEARL* necklace made by Mirja Mills. I purchased this on MarketPlace in June 2014.

AF Model Plane … made by the amazingly talented Apple Fall aka warehousefifteendesigns Resident. Purchased at the March 2014 round of Collabor88. Because the plane is both Copy and Modify, I shrank it for this picture to what I now call a “Tiny Edit”.

*ionic* Ella … made by lakua Arriaga (it’s the sheep). This is a gacha item at The Seasons Story event, which is currently running. NEW.

:Fanatik Architecture: GRASS … made by Kendra Zaurak. A group gift in June 2014.

2 thoughts on “Alles Had A Little Lamb”