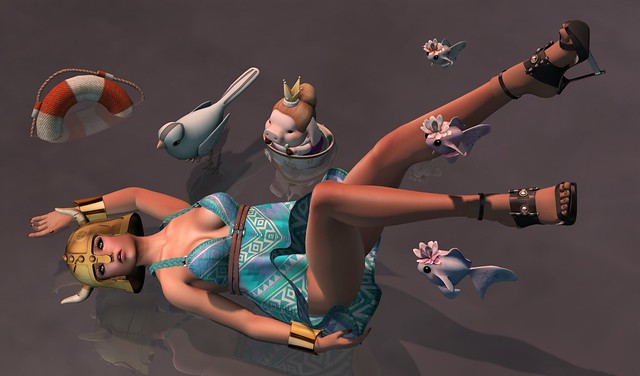 [The Forge] Gorged Helmet, Gold … made by Deccan Arida. Available now at The Secret Affair. NEW.

[:T:] Parted lips 3 … made by Tuli Asturias. Free on MarketPlace.

-Pixicat- Summer.Dress (m) … made by areve Resident. I am wearing one of the Aztec designs in this dress. Available now at The Season Story which is open from July 10th until July 31st. NEW.

Pure Poison – Dangerina Heels for SLINK Medium … made by Shaleene Kenin. Available now at the July 2014 round of The Liaison Collaborative. NEW.

Slink Nail Applier *Weather* [toe] … made by YukaChoco Magic. Available now at TGGS (The Gallery Gift Shop), for a 50% discount while the event runs. NEW. Follow the red carpet when you arrive at the Saikin landing point as TGGS has moved from its usual location as it is celebrating its third anniversary.

Dita’s Grunge Lifebuoy … made by Dita Actor. I have modified this prop to make it smaller.

*ionic* Martin … made by lakua Arriaga (it’s the blue bird). This is a gacha item at The Seasons Story event, which is currently running. NEW.