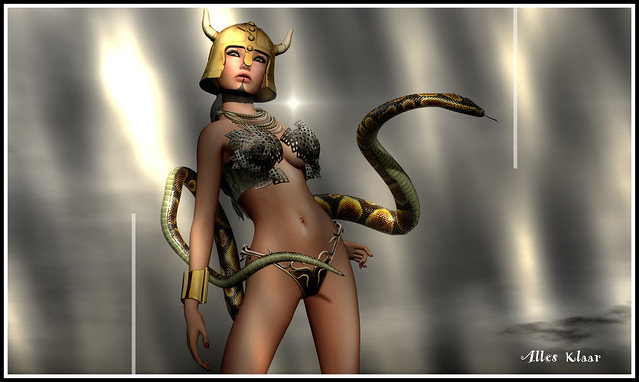 Don’t we all like a little snake play … or is it role play that we really like?

Anyway, I’m wearing a “bits and pieces” outfit in this picture with some offerings from The Secret Affair event which runs from July 15th through until July 29th. Plus some “oldies” from my swollen inventory which helped to finish off this snake-lover’s style!! 😀

So from top to er, bottom, Alles is wearing the following:

[The Forge] Gorged Helmet, Gold … made by Deccan Arida. Available now at The Secret Affair. NEW.

[:T:] Parted lips 3 … made by Tuli Asturias. Free on MarketPlace.

ISON – safari tribe necklace (gold) … made by Harry Hyx. Purchased at the current round of Collabor88, July 2014. NEW.

And I should point out here that NONE of the items that I got from The Secret Affair were gacha items. I have refused to play these machines.

The prop I have used is Serpent8 – Diesel Works which I purchased in August 2013. Even though the snake has a built-in pose if you sit on it, I rezzed the snake and edited it into place so that it fitted snugly around my body.

The pose I have used is Girl Fever 10 … made by Mavi Beck. This is one of ten poses in the Ma Vie “Girl Fever” set that is available at her store inworld.