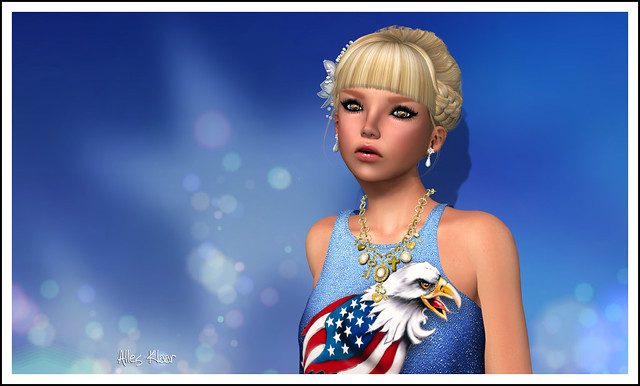 As the clock has just ticked past midnight where I live it is now July 4th – American Independence Day – and hence this new blog post.

But I am also wearing the new and still free Beta Mesh Body from The Shops. This is now the third mesh body I have owned and it’s quite pleasing except when I wear my SLink hands with it, as there is a noticeable gap between where my mesh wrists end and where the SLink hand begins – which is kind of annoying. My solution so far is to wear a big chunky bracelet to cover the gap although I could of course, dispense with my SLink hands and merely wear TheMeshProject hands and feet – although there isn’t so much of an issue with my mesh body and my SLink feet.

So what exactly am I (Alles) wearing:

GizzA – 4th July Costume / Top Size XXS … made by Giz Seorn. This was interesting to wear cos I had to go with the XXS size so it looked OK at the front but the back had “holes” in it so it would have required an S or even an M size top to cover it. This is because TheMeshProject body doesn’t quite conform to the standard Second Life avatar fittings.

(I should point out here that the mesh body does come supplied with underwear – a bra and panties – which do fit flush against the body.)

I made this picture while using the KaTink Photo Studio v1.0 Final with a KaTink – July 4th backdrop (it was number 3). However the pose I have used is Girl Fever 06 by Mavi Beck.

One thought on “The Eagle is Hungry”